Questions we will answer: 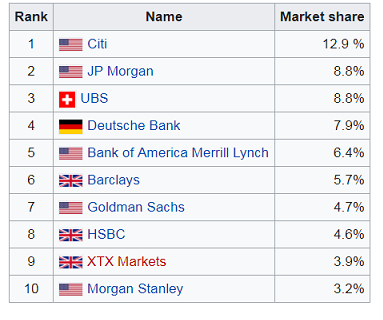 Who Is Smart Money?

Throughout this article, you will read the term ‘smart money.’

I use this term to define the largest market participants; those who move massive volume so large that their position cannot be opened and closed in a single order without spiking the market.

This includes the largest banks, prop firms, massive global companies, insurance companies, Hedge Funds, as well as speculative traders in every variety from around the globe.

It is important to understand that although the banks might control the majority of the daily volume (refer to the chart above), the VAST majority of that volume is those banks acting as a market maker for the other types of traders mentioned above.

Yes, the top 10 banks illustrated in the chart above do take speculative positions, but the vast majority of the volume is simply market making activity, not speculation.

This is critical information, as it tells us 1 very important clue. If banks are primarily market makers then they will by default drive the market to and from areas of supply and demand which is the foundation in how we track them.

What is the forex bank trading strategy?

Definition: The Forex Bank Trading Strategy is designed to identify where the largest market participants are likely to enter or exit their position based on areas of supply and demand.

We term these levels as ‘manipulation points’.

As you can see in the illustration above, the top 10 banks control well over 60% of the daily forex market volume. Because of this, when they move in and out of the market, the market moves! 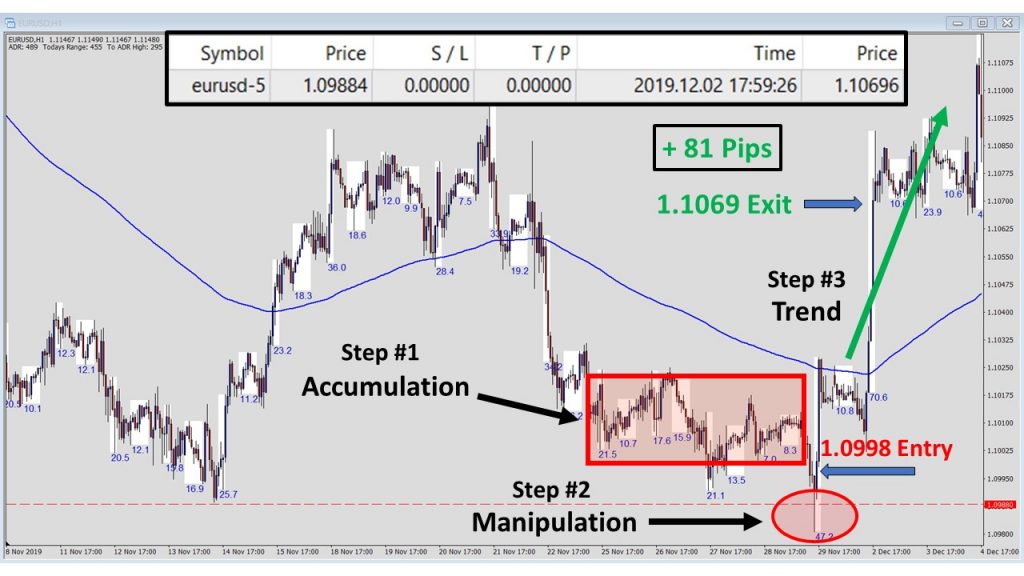 The chart above is of the EUR/USD, and it illustrates the bank trading strategy in action, live.

This article will walk you through the basic outline of the 3 step process behind the forex bank trading strategy.

As an example, if Bank XYZ desires to buy a large position in the EUR/USD, using the principal discussed above they must find an equal amount of selling pressure.

As their positions are so large, they are always entered over time so as to not reveal their hand. This leads us to the first step in the process, accumulation of a position. 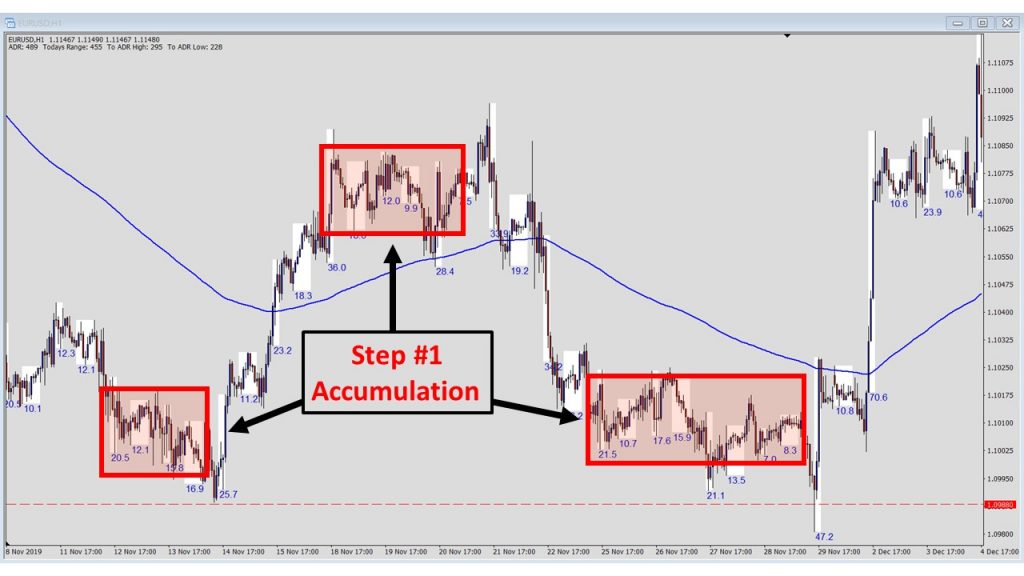 Accumulation: Unlike you and I, because of the massive volume banks control they must enter positions over time that often show visibly as range-bound or sideways price action.

We call this accumulation as they are areas where smart money frequently enters or ‘accumulates’ their desired position over multiple hours or longer.

As their primary function is making the market, they make money by accumulating a long position that is later sold off at a higher price or accumulating a short position they will later cover or buy back at a lower price.

What comes after this period of accumulation? 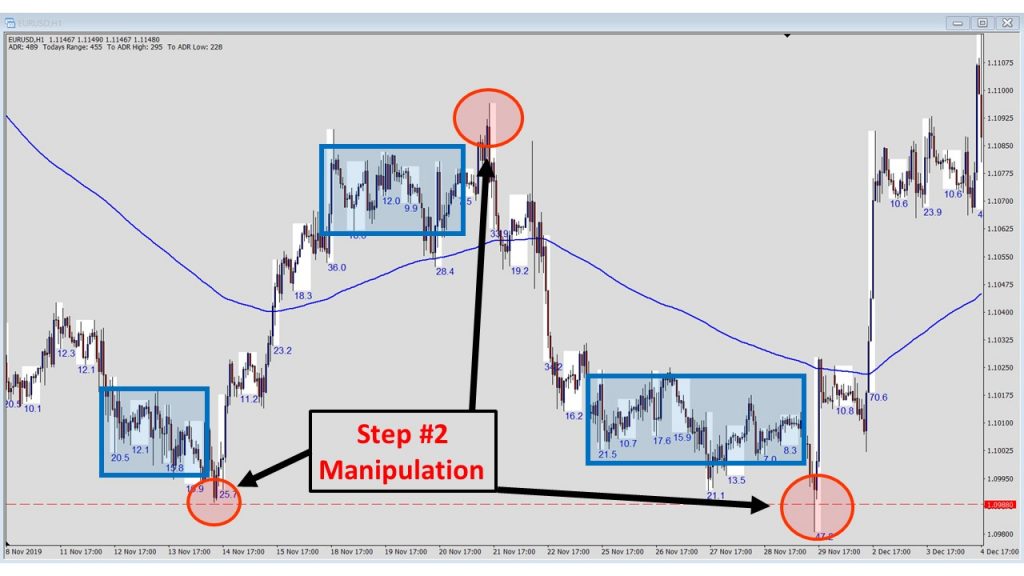 Manipulation: Over the last decade of educating traders I’ve heard many forex traders say that it feels as if they are entering the market at exactly the wrong time.

Many traders feel as if the market is just waiting for them to enter before it instantly turns the opposite direction. Not only is that true, but this crucial step we term as ‘market manipulation’ is critical to tracking banking activity in the forex market.

The first point I want to mention is that we use the term ‘market manipulation’ but you could just as accurately describe it as a searching for liquidity, a trapping move, stop hunt, etc.

Regardless of the cause, the manipulation or ‘false push’ that comes at the end of the accumulation phase, is the most important factor in tracking smart money.

Bearish: A stop run or false push beyond the high of an accumulation period likely means that smart money has been SELLING into the market, and a short-term trend in that direction is likely to start.

Bullish: A stop run or false push beyond the low of an accumulation period likely means that smart money has been BUYING into the market, and a short-term trend in that direction is likely to start.

This point, both bullish and bearish is illustrated in the second picture above. As you can see the manipulation comes after the accumulation, and it often occurs right before step #3 begins, the market trend. 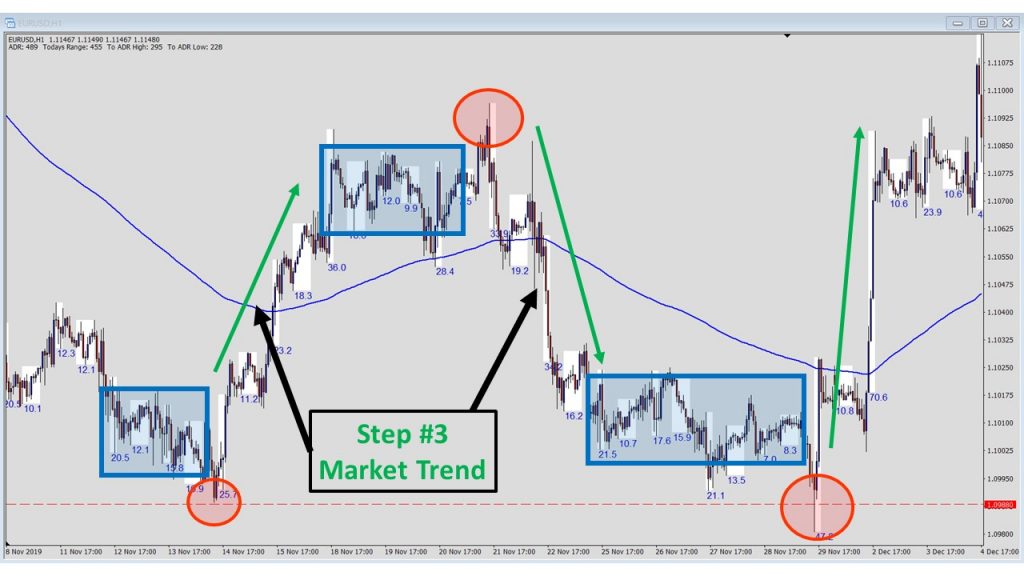 Distribution/Market Trend: The final step after the manipulation is where the money is made, and the market begins to trend!

The goal is to not only avoid the trap of chasing the false break, as most retail traders do but to profit from it!

You can do this by ONLY trading AFTER a manipulation move or false push is clearly visible, and you have a valid stop run and confirmation to confirm the trade entry.

Hands down this is the easiest area for us to profit from but only if we can properly identify the first 2 steps in the process.

No doubt this trading strategy is very different from anything you have been using. Realizing that there is short-term manipulation of prices in the forex market, and learning to read the intention behind the moves will take practice.

Anything in life that is new takes time to learn and this will be no exception. I was trading for 3.5 years before I was producing any type of consistent profit, and many have been at it even longer without reaching profitability.

The point I’m getting at is that this is NOT a quick path to riches.

How do you expedite the process? First, analyze the strategy you’re trading? Ask yourself this, if it doesn’t take into consideration the institutions that actually move this market, how can it produce consistent results?

The fact is, 99% of retail trading strategies are reactive in nature. In other words, when the market goes up, your strategy will begin to produce buy signals and when the market begins to fall it will produce sell signals.

This, however, makes you vulnerable to smart money as they are doing the exact opposite in that they buy into falling markets and selling in rallies.

It’s the smart monies market and turning a consistent profit requires understanding how they move it.

For those looking to learn to trade the official forex bank trading strategy of DTFL then I would recommend the actual Bank Trading Course that you can access by Clicking Here. 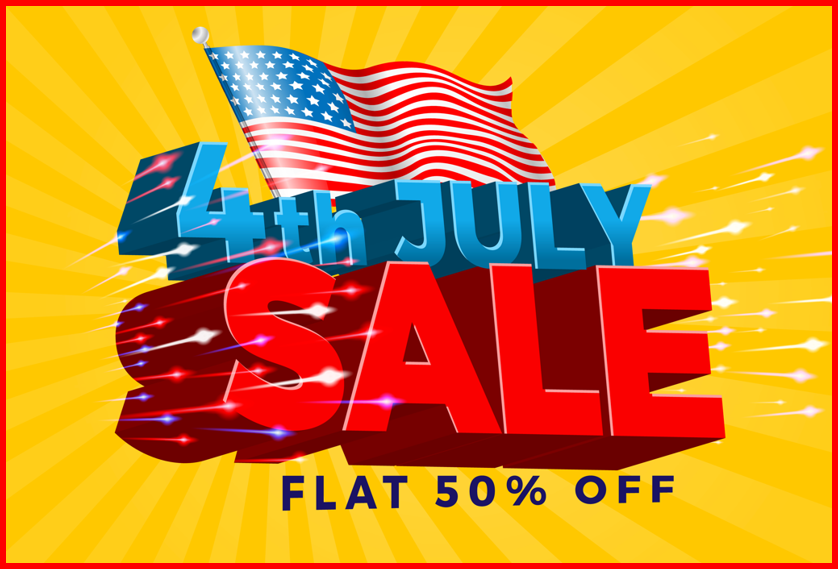