Having taught well over 2,000 aspiring traders over the course of the last 4 years, trader psychology or the way one thinks more often than not dictates success or failure rather than strategy alone. Through the rest of this article we will examine the critical way in which psychology can effect a traders actions. Additionally we will break down 4 ways you can make sure it effects your trading in a positive way. 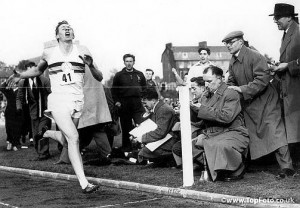 Some medical ‘experts’ even said running the 4 minute mile would result in death! How then was Roger able to set this amazing record. Its been said that after failing to run a sub 4 minute mile many times, he then began relentlessly visualizing in his mind running a 4 minute mile. On May 6th 1954 Roger had already broke the 4 minute mile many times in his mind which was the key to doing so physically. What truly shows the power of belief is that after Roger proved it was possible 16 others broke 4 minutes by the end of 1957. This story holds a truly critical principal successful traders already use on a daily basis.

Outside of the Day Trading Forex Live members community I rarely talk about my ‘turning point’ in the Fx market. I literally remember everything about that exact moment when I decided that no matter what it took I would be a successful forex trader. I had yet to achieve my goal of consistent success in the market, but from that point forward I was certain I would! History has proven countless times that those who believe they can and those who believe they cannot are generally right. The fact that belief always precedes success is a universal law that will never fail.

It is very difficult to put into words just how important a positive attitude is for trading success. Getting into a positive mental state and then staying their however can be very difficult, 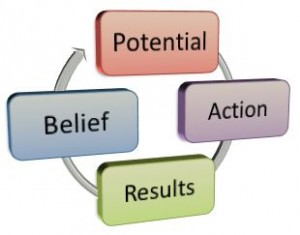 especially after taking a series of losing trades. The picture to the right illustrates the cycle many traders go through mentally when they first start trading. Lets break down each of these four points individually, as well as how they effect each other collectively.

1.) Potential ~ Your potential is dictated by your beliefs which have been formed over the course of your life. Those who were raised in poverty tend to have the belief that they have little potential and thus why the vast majority who were raised poor continue this way throughout their life. A great example of this is the welfare system. Studies have shown that those who grow up on welfare have a much higher probability of becoming a second generation welfare recipient as compared to those who grew up in now welfare supported households.

As it relates to forex, many traders continually lower the potential they believe they will achieve. Why does this happen? Many times this is the result of trying and never succeeding with every mainstream trading strategy, software, or EA. Years of jumping trading system to system not only produces the relentless cycle of hope and loss, but it also slowly lowers your level of expected potential. This is extremely dangerous to your success!

2.) Action ~ When you believe the potential for your success in trading is low (normally caused and reinforced by years of failing) you then will take little action which is the second point in the cycle. The amount of action that you take is directly related to the potential or certainty of success. If you believe 100% that there is no possible way you can fail this will spur you to take massive action. Unfortunately this also goes the opposite direction as well. When you are not certain of success due to the numerous years of little or no success you will take little action which brings us to our third point…results.

3.) Results ~ Anytime someone has little or no certainty in their future success they then take little or no action which leads to negative or poor results. Are you beginning to see how these points are connected?

4.) Belief ~  Your beliefs are a directly related to the results you achieve. Lets put all four parts of the circle together to see how one point can effect the next. To begin, if you believe you have little potential for success you will take little or no action which will then lead to poor results and those poor results will only reinforce the belief that you cannot learn to trade forex successfully. To this point we have taken the viewpoint of a negative mindset, but it is even more important to understand the cycle works for the positive as well. When you have complete conviction that you will succeed in the forex market you will take massive action which in turn leads to positive results. The positive results you achieve will then reinforce your belief that you will succeed, and the cycle continues from their. Lets break down 4 ways to change a negative cycle into one that is positive and promotes success.

How To Develop A Positive Cycle

1.) Don’t Trade Alone ~ The fastest way to start developing a positive cycle is by seeing positive results right away. How can you see positive results before actually achieving consistent profits of your own? One of the fastest ways to experience positive results is though a community.  Seeing others succeed, and hearing of success, allows you to visualize positive results before you actually achieve them yourself. Many people were able to break the 4 minute mile, but only after Roger Bannister did so first. Being part of a forex community will essentially give you access to the “Bannister’s” of the forex market. Knowing success is achievable will allow you to be absolutely certain of your own success, even if it has yet to officially come.

2.) Have A Plan ~ Napoleon Hill said “those who fail to plan, plan to fail.” Having a plan is essential to developing and maintaining a strong positive belief in your success.  Do you know the exact criteria that is required to take a trade? Do you know how to manage a trade once you enter a position? What is your exit criteria? The importance of a detailed trade plan is huge! Without criteria that can be followed each and every day, consistent success will be very difficult if not impossible to achieve over the long haul.  Do you have a detailed trade plan? If the answer is no, and your struggling to be consistently profitable this could very well be playing a part.

A well defined trade plan also plays a large part in overall confidence. When you know how to handle each market condition before it occurs you can be confident in your ability. Sun Tzu said in The Art of War, “Every battle is won before it is ever fought” and the same could be said of every trade. Much like battle, your pre-trade planning can make the difference between a successful trade and a losing one. In addition to your trade entry, knowing you have a clear well defined plan for trade management and trade exit should instill even more confidence. How can you develop a trade plan if you haven’t to this point? That brings us to the next point.

3.) Gain Knowledge ~ Knowledge goes hand in hand with a positive belief! It is difficult to believe you can succeed without the proper knowledge. If you lack the knowledge this MUST 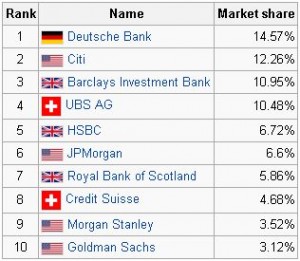 be your first goal! Truly understanding how the banks move the market is powerful information that transforms belief from negative to positive quicker than anything else. As traders we all know that markets are driven by the person or group that controls the majority of the volume.

Because 10 banks control over 75% of the daily volume in the Fx market we know they control intra-day trends. As a result if you can learn to track the banks you will know the next direction of the market with a greater degree of certainty. Think for a minute about how powerful that information is. The vast majority give little or no attention to understanding banking activity, even though the banks power is far from a hidden secret! The bottom line is you either understand how the banks manipulate the market or you become the victim of their market manipulation. Sadly after years of losses many end their ‘trading career’ without ever learning this critical information.

4.) Take Action ~ Making changes involves taking action. I think it goes without saying that you cannot go from failure to success by simply doing nothing. Success never comes easy. With that being said the initial step is always the hardest when it comes to making difficult changes. It is important to remember though, that the cycle mentioned above builds on itself. If you start out taking a clear, guided, and positive step towards your goal success will perpetuate itself and become easier with time. You must however take that first step.

Promise yourself that today will be the day you start taking forex seriously. Take that first step and begin doing your own research into how the banks move the forex market and how you can learn to track banking activity. This will not only simplify your forex trading strategy but it will also give you an understanding of how and who is actually moving the market. Once you have gained the accurate knowledge you can then begin putting together your trade plan in detail. From that point I would urge you to get around those who are of like mind. If your interested in joining our forex community and learning actual bank trading strategies you can check out our Advanced Bank Trading Course.

P.S – A lot of information that is similar to what I discuss in the article above is covered in this video. While the topic is different the principals of success are universal and therefore I would highly recommend watching it.

Check Out These Other Training Articles & Videos