While every successful trader has his or her own way of being consistently profitable, there are a few “common denominators” that all profitable traders follow without exception. Chad and I have a combined 17 years of experience in this market, with 8 of those years spent teaching others our forex trading strategies. As you might imagine we have met many traders along the way. As Chad and I discussed this forex training article series we thought of the different common denominators all successful traders we know follow. In part 1 of this training series, we will break down risk/reward and discuss its importance if you are to ever profit from the forex market.

Why Is Risk/Reward Critical?

Forex trading by its very nature is a game of statistics and probabilities. Profitability is the combination of a win to loss ratio vs. the risk/reward of those trades taken. Simply put one can be profitable in ONLY two ways. First you can maintain a high winning percentage, or second, you can maintain a high risk/reward (R/R) ratio. What though is the common denominator between profitable traders? Without a doubt, the answer is risk vs. reward. Those who strive after a win/loss ratio of 80-90% almost always do so at the expense of the R/R ratio, and this is a dangerous trade-off.

The best way to illustrate the importance of R/R is to show a real-life example of it. Below is roughly a month and a half of Chad’s track record. Let’s break down the numbers…

Does this begin to make clear why R/R is so critical if you are to ever become a successful forex trader? Contrary to the lie many tell….most profitable forex traders win between 60-70% of their trades based on our experience over the years. Over the last month and a half Chad has managed a to turn a profit on 53% of his trades. Would you consider that track record a success? Without a doubt, the win/loss ratio is lower than both Chad and I usually average but this so perfectly illustrates the power of the bank trading strategy and its ability to present high R/R trade setups. 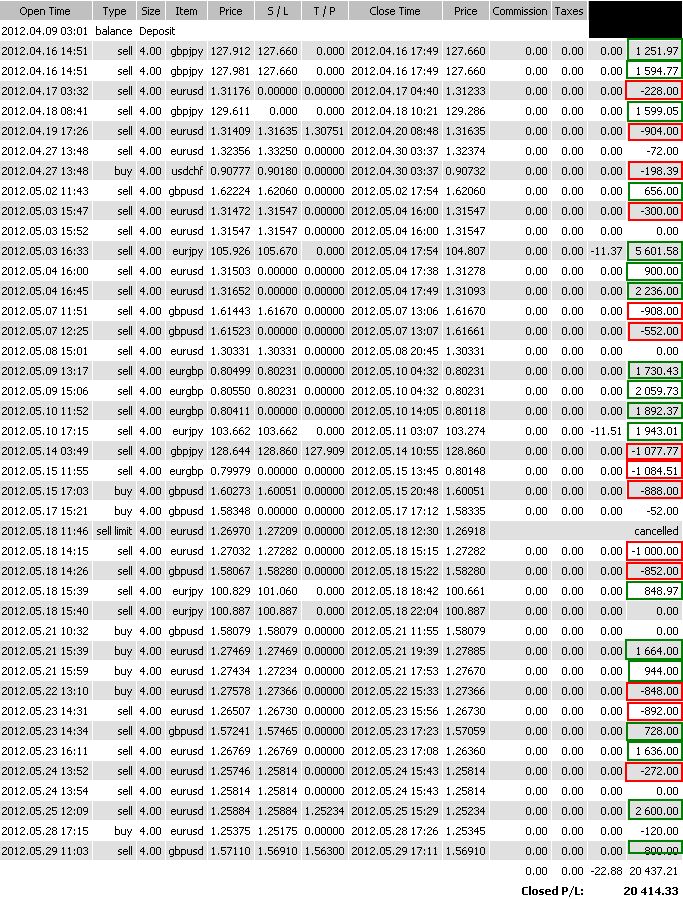 Breaking Down The Numbers…

While 4 standard lots is not a huge lot size, most reading this will be trading with an account that is smaller and thus is using smaller lots sizes per trade. To illustrate the power of R/R lets break down the numbers using an account size of $2,000. If you risk 2% per trade that would be $40 risk per trade you take. Thus if you keep the 2.8 to 1 R/R as shown above you would profit $112 on each winning trade. Let’s see how this breaks down using the number of trades in the track record above…

Using the R/R in the track record listed above you could win as little as 30% of the time and still make money! Hands down if your losing money in the forex market it is almost certainly because you have a poor R/R per trade. I strongly urge you to go back through your last 50-100 trades and determine your overall R/R ratio. How then does one increase their R/R properly?

At this point, I’m sure you can see the value and importance of maintaining a high R/R in your trading. At the heart of the track record listed above is the forex bank trading strategies. The concept is really quite simple. When the banks enter a trade they do not do so to make a 5, 10, or even 20 pip profit. As we have discussed before because they enter positions over time it takes larger moves in order to exit those accumulated positions. Because of this when a trader has truly identified a high probability bank trading setup the market is usually in for at least a 90 pip move.

Trade setups such as the stop run reversal for example, often allow for -20 pip stop losses….thus a 2 to 1 R/R on these day trades is normally achievable. Additionally trading with the smart money trend generally gives high R/R setups. The key is understanding how the banks move the forex market and taking those high probability setups when at least a 2 to 1 R/R is probable. Doing so is the key to profits like those seen in above!

REMINDER: For the rest of the month you can get the Bank Trading Course, Live Training Room, Members Forum, Daily Market Previews, and Lifetime Support at a 35% discount by Clicking Here.