“So what does today’s potential stop run of the highs mean. Simply put it gives us a good indication of the next short term trend direction. When I say short term I mean a week to possibly a few weeks as that is “short” for the daily chart. Beyond that time it doesn’t tell us much.” That was a quote from the blog post titled S&P 500 Potential Day Trade Short Setup from September 22nd . The reason I pointed out that it was an indication of short term direction only, is because we need more information than a daily stop run setup to predict a bull market top. In following articles I referenced how previous market tops responded. As traders the past tends to repeat itself…especially in the equity market. Historically speaking once the first major drop occurs you almost always see a 50-75% retracement of the initial move down. That key area is really the deciding level as to the next direction of the market. As you can see we have blown through this retracement level, with the Dow now setting new all time highs and the S&P 500 trailing close behind.

The biggest question is where do we go from here? I can say for certain I wouldn’t be buying equities at this point. Does that mean it can’t rally a few thousands points from here? While that may not be the rational move, we all know markets do not always do the rational thing. At this point I would be sitting on my hands from a longer term perspective. The Fed just closed out QE and the after effect is settling in. Aside from that most drops start with a false break of previous highs, something we term as a stop run or manipulation move. At this point we have no indication that this is occurring thus why it is a waiting game for more information. Another key point is that the market has rallied for years on the back of Fed intervention. That is now coming to a close and the market has decided it wants to rally on no QE as well? I’ve said this 1000 times and I’ll say it again. Equities should reflect the general health of the economy. When they do not one of them will always make a correction. I’ll let you be the judge as to whether that correction will occur in equities or the economy. 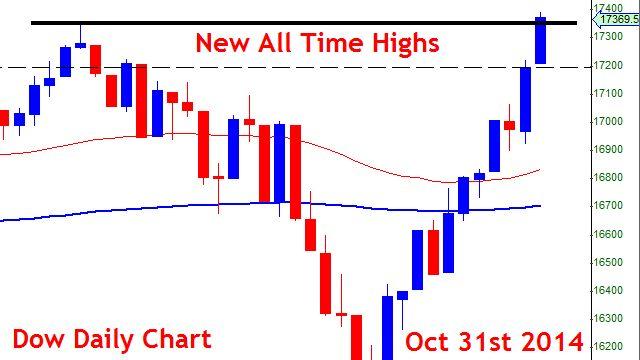 Personally I don’t care a great deal about long term investment in the equity market. One thing I do firmly believe in is physical assets. Gold and silver have 6,000 years of history proving their value. On the other hand what is the longest running currency NOT backed by gold or silver? If you don’t know that will be today’s homework assignment:) Historically, nothing has the ability to preserve wealth like gold and silver. All those in our live training room know that I personally sold all my silver around the low $30’s. I also liquidated my gold at the same time. I currently hold no physical metal. Why? Well, as I explained at the time I do firmly believe gold and silver is the best store of wealth, but I also believed we were going to see lower prices. That “trade” ended up being a good decision as now silver is nearly half price from that point and gold is down 30-40% from that time as well. So should you be buying gold and silver? 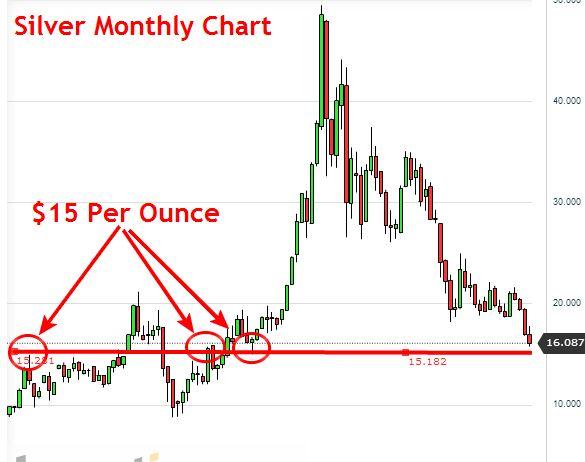 Personally I think $15 is a likely target for silver. We really don’t have a great deal of previous response points on the chart around the current levels. The market did however turn from $15 an ounce multiple times back in 2006 and 2009. If we break and hold below $15 per ounce in silver then I feel like the low teens or possibly even $10 an ounce silver is possible. At this point we are getting into a price point where mining silver alone is not sustainable at this level. Many bulls use this as an argument for why we wouldn’t go back below $25, then $20, and so on. As I pointed out to our members many times that is a bad argument. Silver is more often than not a bi product of other mining and thus not a huge impact on most mines overall bottom dollar. Therefore I don’t believe that argument holds much weight. That is why I was selling in the low $30’s as I felt price suppression was very likely. So what am I doing now? Personally I’m starting to buy where opportunities arise (email me for how I buy). I think we still may see a bit lower prices so I’m not going crazy but I definitely want at least 25% of what I intend to buy total.

I have always been a much bigger fan of silver as compared to gold. Does that mean I think gold is a bad investment. NO! I think it is historically the best store of wealth. I favor silver as an investment because it is a consumable metal unlike gold and therefore supply issues exist where as that is not the case with gold. I personally will not look to buy gold until we near $1000 per ounce. I think that is a very likely target. If $1000 an ounce breaks and holds then $700-800 becomes very possible. When I talk about gold or silver you have to understand I’m not referring to it as a “trade”. I’m not looking to buy low and sell high. The reason I invest in gold or silver is because it serves as the greatest protection against the worst case scenario. Therefore I do things very differently when buying gold or silver. First I only buy physical. If you own “paper” gold or silver then you don’t have the protection of gold or silver. Also I’m essentially averaging down as I buy more with lower prices. This is a practice I would never recommend for trading. I however am not trading gold or silver I’m investing in a wealth protection asset with a 6,000+ year track record. If your trading gold or silver then you should NEVER buy physical. The spread is to high and if your only trading to capitalize on the price fluctuation then electronic trading is the best option. Anyway, I hope this article helps. I’ve had a bunch of emails as of late in regards to my long term opinion on gold and silver and with the big move it was a good time to put a trade plan in place. Happy Trading!

Interested In Learning To Trade And Want Daily Support? Check Out Our Bank Trading Course And Live Training Room Here.