UPDATE:  I Thanks for all the emails in regards to this post. Since I had a few emails that were roughly the same I figured more probably had the same question….how do you manage a trade that goes sideways. I have 3 basic criteria that will cause me to exit a trade. First if my limit or stop loss is hit….pretty obvious. Second, is if I see a stop run/manipulation against the trade that I’m in. What applied to this trade was the third criteria which is what we call the session change rule. The session change rule is quite simple. If you carry a trade from one session into the next you want to protect that trade by either moving the stop loss to break even or closing the trade out. Therefore if I’m still carrying a trade at 5PM (going into the next session…close of the trading day) I close the trade out. Some prefer to simply move to break even…either way the result for this trade would have been roughly the same as the price at 5PM was right around the entry point.

In my opinion the biggest advantage to tracking smart money has nothing to do with winning a high percentage of trades. Rather, the high potential reward as compared to initial risk that often comes with these setups is the true gem. The trouble for most retail traders is they focus on win/loss, win/loss, and win/loss…did I mention win/loss? The bottom line is we all have the same goal which is consistent profit. There are two ways to achieve that goal. One is a high win/loss and lower R/R, while the other is a higher R/R and a lower win loss. In all the years I have been trading every successful trader I knew had a great reward as compared to their average risk. That is why I often refer to a high R/R as the forex traders holy grail. 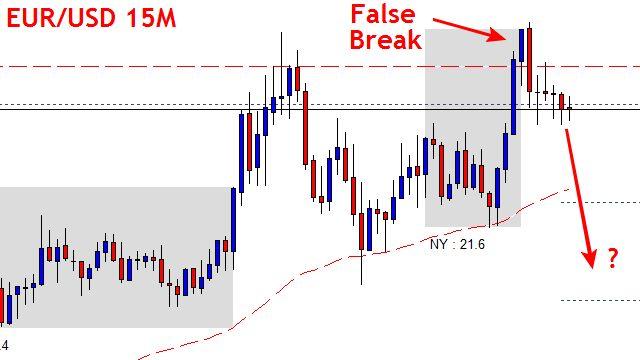 The chart above gives a nice example of searching out high R/R scenarios. Today the Euro created a new high during the London session. Later in the NY Session they come back and take out the previous manipulation point and provide a confirmation entry trade setup. So what is the true beauty of this setup. Is it a win/loss of of 70%….NO. I never win 70% of the time….in fact I don’t remember that last month I did. The true beauty of this setup is if you truly did catch a manipulation move then you know your in a high R/R scenario.

I would rather win 50% of the time with a 2 to 1 R/R as compared to winning 70% of the time with a 1 to 1 R/R. Psychologically it is much easier to trade that way as well. If you take 2 losses in a row with a high R/R strategy you know 1 successful trade wipes that out and possible more. Digging yourself out of a hole is plain and simple much easier which keeps you from making the stupid decision such as over leveraging or over trading to make back losses.

Ok I’m jumping off of my high R/R soapbox…